The grave couldn’t hold Him! Oh how thankful I am for Jesus!

I just returned from watching the movie Risen with my husband and mom. While I realize the story is fictional (but built around the truth of the resurrection), I must say that it really increased my faith. It was so nice seeing Jesus portrayed by an actor that wasn’t Caucasian and perfect looking. I found myself in tears at times. At other moments, I had to turn my face from the screen due to the violence. (It’s rated PG-13 and we normally don’t watch beyond PG.) But when all was said and done, I was glad I watched it—especially today.

My prayer is that you have a personal relationship with the risen Savior, Jesus Christ. He loves you more than you can fathom. You may not be able to see Him, but He’s right there beside you. If you don’t know Him, I encourage you to seek Him. You will find Him. ❤

I have always loved Phlox. I grew up thinking of them as weeds, but their bursts of color always brought me joy. Grandma’s backyard was full of them. Not in the flowerbeds but throughout the sandy yard. They kind of just happened.

Casey and I have been wanting to add some color and life to our front yard since the Peace Lily’s aren’t blooming, and the one bloom on the Gerbera daisy has croaked. We decided to go to Lowe’s to look at some flowers.

I had told him the importance of planning out what we were going to do exactly, but He wanted to “just buy some flowers and stick them in the ground.” LOL. However, once he got there and saw all of the possibilities, he changed his mind. I decided to take pictures of the ones we liked for future reference, most of which were perennials.

The Wikipedia definition of perennial is this: A perennial plant or simply perennial is a plant that lives for more than two years.

Don’t get me wrong, there were several annuals we liked, but the idea of planting it, caring for it, and then having to uproot it and plant another seemed involved. We are not “involved” people. In fact, a couple of years ago at mom’s we planted a vegetable garden on the side of the house and soon it was overgrown with weeds and the vegetables were dead. Perhaps that is why we didn’t leave with any plants that day . . .

For many, such as my mom, gardening is therapeutic, so planting annuals each year is a joy. I suppose it could be. I simply find joy in the blooms—the blanket of color bringing life to any environment. But as with pruning, we must put forth the effort to reap the reward.

For me, there would likely be tears since I know nothing about gardening! 🙂 But oh the joy I would experience after all of the hard work. What are you sowing and hoping to reap? What breakthrough have you been praying for and faithfully trusting God for?

Photo taken by Yotoen and shared via Flickr Creative Commons. See it here.

“Every branch in Me that does not bear fruit, He takes away; and every branch that bears fruit, He prunes it so that it may bear more fruit.” —John 15:2

Last week I finally took to pruning the Peace Lilie’s I had on my porch. The large one was delivered to me last January from the Premier Designs’ prayer team after my ankle fusion surgery (thanks Mike Glenn). 🙂 I received a smaller one a few days before my surgery at our housewarming party. It was a gift from Christian humorist and author Deb Coty. Needless to say, after over a year or neglect (hey, I watered them when their leaves drooped), I finally decided to prune them.

There was a problem though . . . I didn’t know the first thing about pruning something! Mom had a green thumb and I, well, I guess you could say I have a black thumb and it’s not from being in plant soil! There were 39 text messages between mom and I regarding pruning the lilies as well as my Gerber daisy (I was feeling brave). I included many pictures to ensure I was doing it properly. The conversation went something like this:

Me: Question: how far down do I cut the Peace Lily?

Mom: Each old leaf down to the base.

(I sent her pics from the gun range earlier)

Mom: What happened to the Peace Lily?

Me: Nothing. I’m pruning it. 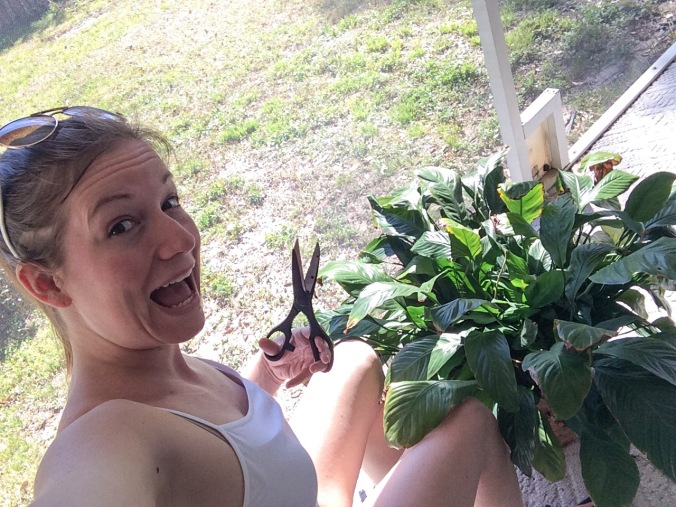 When you don’t have pruning shears, kitchen scissors will work. Kind of.

Mom: Have fun! Remember you can’t hurt it.

Mom: It will look great in no time.

It took a lot more time than I had anticipated, and my back was hurting quite a bit. Truth is, it was painful for the both of us, but the end result was amazing. It probably took me an hour or so, and I kept thinking how much less work it would have been had I stayed on top of it from the beginning . . .

It was a fresh start for the plants. I felt a little lighter as well. There is something about the process of pruning that excites me. As with uprooting, it’s the process of getting rid of the old to make way for the new. It’s clearing out the dead so that the living can thrive. Isn’t that what Jesus instructs us to do? Change can be good, though sometimes painful. In the moment of pruning it’s difficult to see the buds that it will produce but when they bloom, we remember.

Is there some pruning you need to do in your life? Spring is among us! 🙂

Someone found a use for the trimmed leaves.

This little guy was hiding in here the whole time I was pruning it (including carrying it through the house).

“Truly, truly, I say to you, whoever hears my word and believes him who sent me has eternal life. He does not come into judgment, but has passed from death to life.” —John 5:24

The other day while driving, I saw several fields of dead grass. They seemed so lifeless—so barren. It wasn’t long before I noticed that beyond the fields were green wooded areas. Life.

I thought about life on this earth and how we are passing through trial after trial. Our view of life may be very much like this dead field. Perhaps we are going through a rough season and aren’t sure we have the strength to make it through. We can rest assured that we will get to the greenery again, whether in this life or the next.

Your woods are waiting. Find your hope in the shelter and shade of the Father who loves you more than you can fathom. 💞